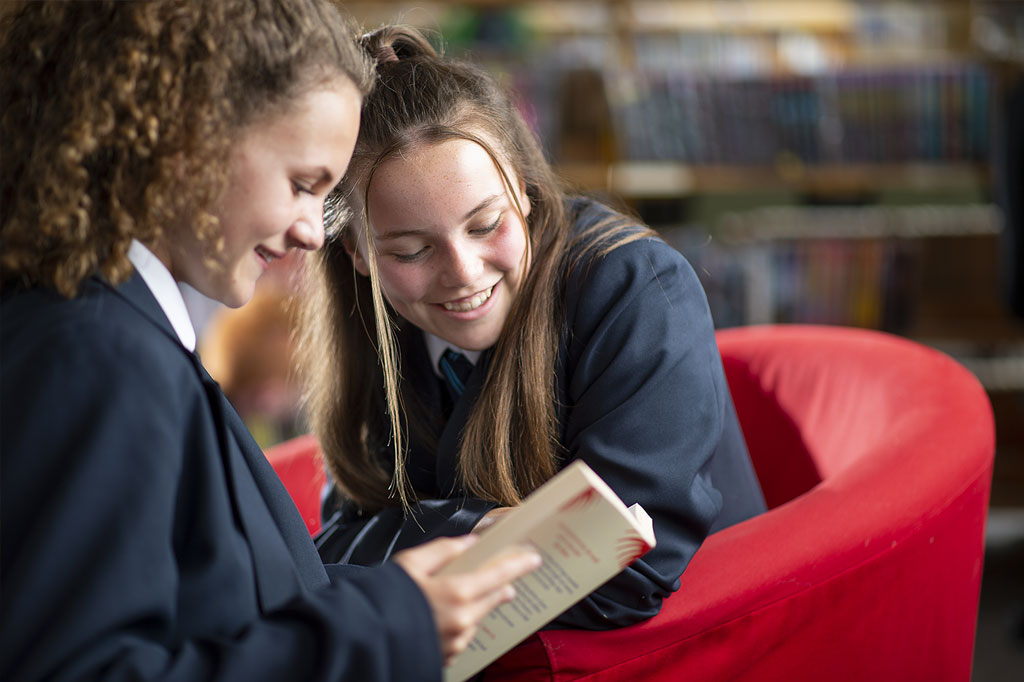 This policy will be used during 2021/22 for allocating places in the main admission round for entry to Year 7 in September 2022. It will also apply to in-year admissions during 2022/23.

The County Council will consider first all those applications received by the published deadline of midnight on 31 October 2021. Notifications to parents offering a secondary school place will be sent by the County Council on 1 March 2022.

For the normal admission round, all preferences will be considered simultaneously and ranked in accordance with the admission criteria. If more than one school can offer a place, the parent’s highest stated available preference will be allocated.

Pupils with an Education, Health and Care Plan

When the school is oversubscribed, after the admission of pupils with an Education, Health and Care plan naming the school, priority for admission will be given to children in the following order:

(i) Looked after children are defined as those who are (a) in the care of a local authority, or (b) being provided with accommodation by a local authority in the exercise of their social services functions (see the definition in section 22(1) of the Children Act 1989). Previously looked after children are those who were looked after but immediately after being looked after became subject to an adoption order, child arrangements order, or special guardianship order. An adoption order is an order under section 46 of the Adoption and Children Act 2002 or section 12 of the Adoption Act 1976. Child arrangements orders are defined in section 8 of the Children Act 1989, as amended by section 12 of the Children and Families Act 2014. Child arrangements orders replace residence orders and any residence order in force prior to 22 April 2014 is deemed to be a child arrangements order. Section 14A of the Children Act 1989 defines a ‘special guardianship order’ as an order appointing one or more individuals to be a child’s special guardian (or special guardians). Previously looked after children also includes those who appear (to the admission authority) to have been in state care outside of England and ceased to be in state care as a result of being adopted. A child is regarded as having been in state care outside of England if they were in the care of or were accommodated by a public authority, a religious organisation, or any other provider of care whose sole or main purpose is to benefit society.

(ii) Applicants will only be considered under this criterion if on the application form (online or paper) they have ticked the appropriate box explicitly indicating that they wish for their application to be considered under medical / social need.  ‘Medical need’ does not include mild medical conditions, such as asthma or allergies. ‘Social need’ does not include a parent’s wish that a child attends the school because of a child’s aptitude or ability or because their friends attend the school or because of routine childminding arrangements. Priority will be given to those children whose evidence establishes that they have a demonstrable and significant need to attend a particular school. Equally this priority will apply to children whose evidence establishes that a family member’s physical or mental health or social needs mean that they have a demonstrable and significant need to attend a particular school. Evidence must confirm the circumstances of the case and must set out why the child should attend a particular school and why no other school could meet the child’s needs. Providing evidence does not guarantee that a child will be given priority at a particular school and in each case a decision will be made based on the merits of the case and whether the evidence demonstrates that a placement should be made at one particular school above any other.

(iii) ‘Staff’ includes all those on the payroll of The Hamble School who (specific to clause (1)) have been an employee continuously for two years at the time of application. ‘Children of staff’ refers to situations where the staff member is the natural parent, the legal guardian or a resident step parent.

(iv) A map of the school’s catchment area can be viewed on the school’s details page on the Hampshire County Council website www.hants.gov.uk/educationandlearning/findaschool.

If the school is oversubscribed from within any of the above categories, straight line distance will be used to prioritise applications; applicants living nearer the school have priority. Distances will be measured from the Ordnance Survey home address point to the school address point using Hampshire County Council’s Geographic Information Systems (GIS). Distances to multiple dwellings will give priority to the ground floor over the first floor and so on. On individual floors, distances will be measured to the stairs leading to the communal entrance. Where two or more applicants are equidistant, random allocation will be used to allocate the place. An explanation of the random allocation procedure is available on the County website. This method of prioritising admissions will also apply to any ‘school specific’ criterion unless otherwise stated in the school’s brochure.

a) Children living in the affected area who have a sibling on roll at The Hamble School who was admitted when their address was still in the catchment area prior to it changing, and who will still be on roll at the time of the younger sibling’s admission, will be given catchment priority for admission to The Hamble School. Transitional arrangement in place up to and including for admissions in September 2024.

b) Out-catchment children living on an area of land north of the M27 (previously in the catchment area for The Hamble School) who have a sibling at the school who were admitted when their address was still in the catchment area for The Hamble School prior to it changing in September 2021 and who will still be on roll at the time of the younger sibling’s admission, will be given ‘catchment, sibling’ priority. Transitional arrangement in place up to and including for admissions in September 2025. [School specific criteria]

The child’s permanent residence is where they live, normally including weekends and during school holidays as well as during the week, and should be used for the application. The permanent address of children who spend part of their week with one parent and part with the other, at different addresses, will be the address at which they spend most of their time.

Where a twin or child from a multiple birth is offered the last place available within the PAN, any further twin or child of the same multiple birth will also be offered a place, if the parents so wish, even though this may raise the number in the year group above the school’s PAN.

Outside the normal admission round, it may sometimes be necessary for a pupil to be placed by the local authority, or a local placement panel acting on behalf of the authority, in a particular school even if there is a waiting list for admission. Such placements will be made in accordance with Hampshire County Council’s Fair Access Protocol.  The Protocol is based on legislation and government guidance.

Any places that become available will be offered to the child at the top of the list on the day the place became available. The waiting list is ordered according to the criteria of the admission policy with no account being taken of the length of time on the waiting list or any priority order expressed as part of the main admission round. Fair Access admissions and school closure arrangements will take priority over the waiting list.

For entry to Year 7, the waiting list will remain open until 31 August 2023, at which point all names will be removed. For all other year groups, waiting lists will remain open until 31 August of each year. Parents who want their child to be considered for a place at the school in the following school year must submit a new in-year application in the August preceding the new school year. Schools will send a decision letter within the first 10 days of the new term.

Admission of children outside their normal age group

Parents may request that their child is admitted outside their normal age group. To do so, parents should include a request with their application, specifying why admission outside the normal age group is being requested and which year group they wish their child to be admitted. Decisions will be made based on the circumstances of the case and in the best interests of the child.

Governing bodies may apply to the Director of Children’s Services to include in their school policy a criterion which they regard as essential if children are to be treated fairly in relation to clearly defined local conditions. The application will cover both the substance of the criterion and its position in the order of priorities. In the event of such applications, the Director of Children’s Services will consult the Admission Forum and the criterion will then be determined by the Executive Lead Member for Children’s Services. Any criterion agreed under this category must be published in the school prospectus with its position within the admission priorities clearly indicated.

The Hamble School has one such criteria due to two transitional arrangements following changes to the school’s catchment area.

In the event of a school closure, pupils from the closing school may be given priority for any school nominated as the receiving school. Specific arrangements will be determined by the Local Authority in accordance with the School Admissions Code and will be published at the time for the specific schools affected.

This policy takes account of all Equalities legislation, together with all relevant regulations and the School Admissions Code (published by the DfE in 2021).

¹The PAN applies to the relevant year* only. For other year groups at the school, different admission limits may be applied.  Please ask the school or local authority for details.

* The relevant year is the age group at which pupils are or will normally be admitted to the school i.e. reception, year 3, year 7 and year 12 where the school admits external applicants to the sixth form (Section 142 of the SSFA 1998).

This website uses cookies to improve your experience while you navigate through the website. Out of these, the cookies that are categorized as necessary are stored on your browser as they are essential for the working of basic functionalities of the website. We also use third-party cookies that help us analyze and understand how you use this website. These cookies will be stored in your browser only with your consent. You also have the option to opt-out of these cookies. But opting out of some of these cookies may affect your browsing experience.
Necessary Always Enabled
Necessary cookies are absolutely essential for the website to function properly. This category only includes cookies that ensures basic functionalities and security features of the website. These cookies do not store any personal information.
Functional
Functional cookies help to perform certain functionalities like sharing the content of the website on social media platforms, collect feedbacks, and other third-party features.
Performance
Performance cookies are used to understand and analyze the key performance indexes of the website which helps in delivering a better user experience for the visitors.
Analytics
Analytical cookies are used to understand how visitors interact with the website. These cookies help provide information on metrics the number of visitors, bounce rate, traffic source, etc.
Advertisement
Advertisement cookies are used to provide visitors with relevant ads and marketing campaigns. These cookies track visitors across websites and collect information to provide customized ads.
Others
Other uncategorized cookies are those that are being analyzed and have not been classified into a category as yet.
SAVE & ACCEPT
Powered by